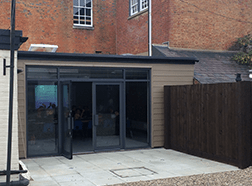 I’ve been meaning to ‘blog for a while now but there always seems to be something that takes precedence. I’m afraid to say that I have been shamed into it by the launch of the ‘new’ website, which splashes the last ‘blog all over the front page and it embarrasses me that I have written nothing since the end of the Summer term…..so here goes.

As those of you who have been back to Woodcote since September will have seen, the ‘new’ Red Lane is finally finished. We are absolutely thrilled with it, and with the two new classrooms off it. I do hope that if you haven’t had a chance to visit yet, you soon will.

Phase 2 of our development plan will soon be under way as we are currently fundraising for the building of a new theatre / concert hall on the site of the old ‘gym’. The plans have been posted in the new C classroom and I would be delighted to talk you through them at any time.

The term itself has started brightly, especially due to the continued good weather and we have been able to organise cricket, swimming and a camping evening alongside all of the usual Michaelmas term events.

The weekday evenings have been filled with Fencing, Archery and the newly formed Karate club, as well as cookery and film nights. There have been Science demonstrations, trips Mountain Boarding, Paintballing and to Legoland, Bingo and Game Show nights, a social at St. Mary’s, Ascot and plenty of football.

The Colts have just returned from a three day tour to Geneva, which was a huge success, with the boys hosted in pairs by local families – all of whom were hugely impressed with their manners and behaviour. This is far more important than the outcome of the matches – although we did win both games!

Next Friday, James Shone – an ex-Housemaster at Monkton Combe, who was discovered to have a brain tumour and subsequently lost his sight through two life-saving operations, is coming to share his story and hopes for the future with the boys in the 5th and 6th forms.

It will undoubtedly be a thought-provoking talk and will, I am sure, demonstrate to the boys how lucky and privileged they really are. I very much hope it will inspire them to even greater things, both now and in the future.