The talented….and the not quite so talented! 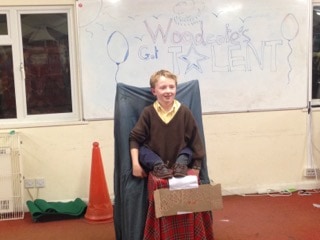 October came and went in a flash and already we are hurtling towards the unmentionable festive season and a very busy time for all at Woodcote!

Just before October half term, there were a couple of notable events for the boarders. First, the annual “Woodcote’s Got Talent” on Friday 16th October.

There is some remarkable, undiscovered talent amongst our boys, including an extraordinary performance by Joshi Smethurst-Gosling, whose rendition of Silento’s Whip Nae Nae would have made it into the X Factor finals.

Finlay Hedges, aka Dynamo, had the judges – Mr. Beharrell and the Matrons – awestruck with his magic tricks, not to mention his skills on the unicycle. Truly outstanding!

One of my personal favourites had to be Milo Tennant and Bold Dickson with the Eating Challenge. Whether this was classed as talent or just pure stupidity is for you to decide, but they each embarked on a succession of spoonfuls of Tabasco, peanut butter, salt, lemon, Marmite and Sarson’s malt vinegar. The facial expressions were utterly priceless!

However the votes were in and the results as follows: BRONZE to Ignacio Guisado for his Freestyle Dance, SILVER to Harry Knight and Seb Campbell-Preston for their Marvin the Midget act and GOLD to Tom Martin, Conor Sexton and Ewan Hunter for their intelligent and comical “Woodquotes”.

Second, on Sunday 18 October, the boarders’ outing was to a Premiership rugby match. Not the World Cup, but nevertheless the boys were treated to a trip to the Madejski Stadium to join 6,597 others to watch London Irish vs. Leicester Tigers. Final score 16-28 to the Tigers.  Mr. Ramage, Mrs. Woodall and Mr. Ovenden also went along, for what was a very jolly afternoon out.

The first Friday back after half term saw Woodcote’s Bonfire Night. This is where the Dominies boys come into their own. Following tradition, they are responsible for the planning and design of the ‘Guy’. This year, the unlucky culprit was Sepp Blatter and with the help of Mr. Ramage, Miss Cavanagh and the brilliant Mrs. Lumsden in the Art Room, they made the most fantastic lookalike Sepp, who sadly fell to his end under all the crates and diesel set up by the Groundsmen. In true British style, everyone enjoyed a burger and toffee apple in the drizzle and Mr. Knight and Mr. Beharrell’s fireworks display was (almost) of a quality to rival the 2000 Sydney Olympics.

There is however only some much excitement to be had and the boys continue to enjoy some down time in the dorms in the evenings in their respective Common Rooms. The Juniors are particularly enjoying Lego, pool and DVDs in theirs, plus the odd bit of gymnastics thrown in. Why would you NOT want to board?!

Coming up…….Fires and Homemade Pizzas, Gravity Force, Race Night and Delivery Pizza, the Winchester Christmas Market and last but not least, the best night of the year, the Christmas Break Up Supper!